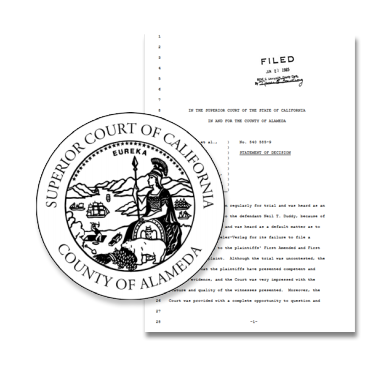 “Accordingly, the Court finds that the manuscript by Neil. T. Duddy entitled The God-Men… [is] in all major respects false, defamatory and unprivileged, and, therefore, libelous.”

The first edition of The God-Men, written and self-published by the Spiritual Counterfeits Project (SCP), contained gross misrepresentations of the teaching of Witness Lee concerning such things as biblical authority and morality. It also sought to associate Witness Lee and the local churches with mental manipulation and Eastern mystical practices. The second edition of The God-Men, published first in German as Die Sonderlehre, included a sociological section, which sought to portray the local churches as deceptive, coercive, and destructive. The Statement of Decision documented the defendants’ reckless disregard for and intentional, knowing distortion of the truth regarding the local churches. Judge Leon Seyranian ruled that The God-Men was “in all major respects false, defamatory and unprivileged, and, therefore, libelous” and awarded $11,900,000 in damages to the plaintiffs. It was at the time the largest award ever in a libel action, but the plaintiffs only received less that 0.3% of the award because SCP had declared bankruptcy to avoid involvement in the trial.

See the full Statement of Decision